To move through the essay scroll ---> or use the arrows.

There are 190 images in this essay, and may take time to load.  A slideshow option can be found in the bottom right corner of the screen. 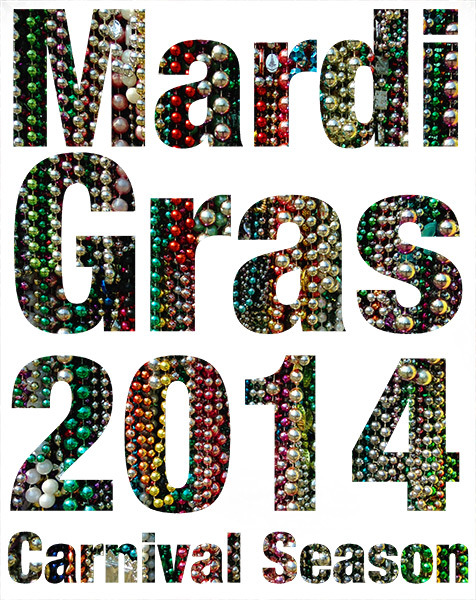 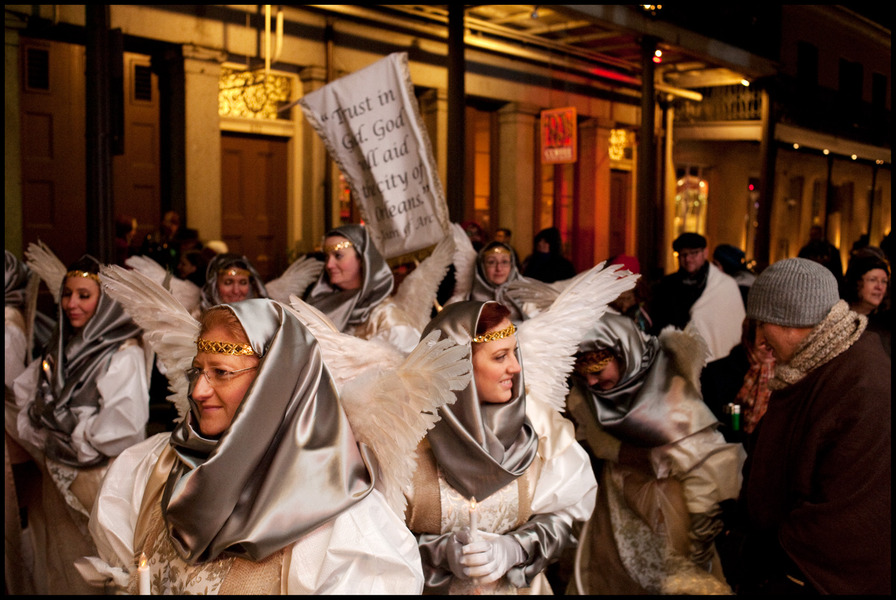 Krewe de Jeanne d'Arc kicks off Mardi Gras on the Twelfth Night with their sixth annual procession through the French Quarter on January 6, 2014. 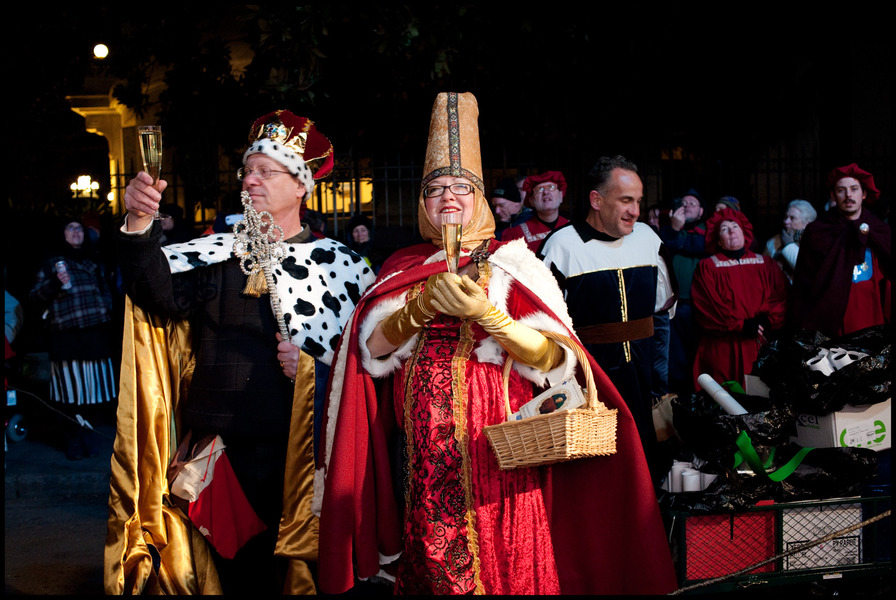 New Orleans Carnival season begins on the Twelfth Night marking the start of the Catholic season of Lent. Mardi Gras goes through Fat Tuesday, which is followed by Ash Wednesday and the start of Lent. New Orleans was established by the French Canadian Sieur de Bienville in 1718, and by the 1730s, Mardi Gras was taking root in the Crescent City. In 1856 the first krewe, the Mistick Krewe of Comus, formed as the first major step towards resembling today’s Mardi Gras. 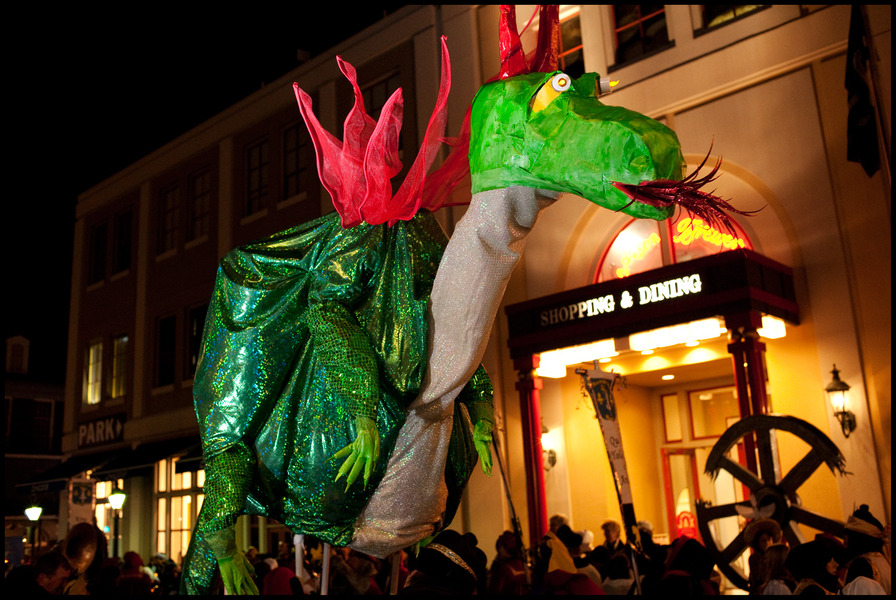 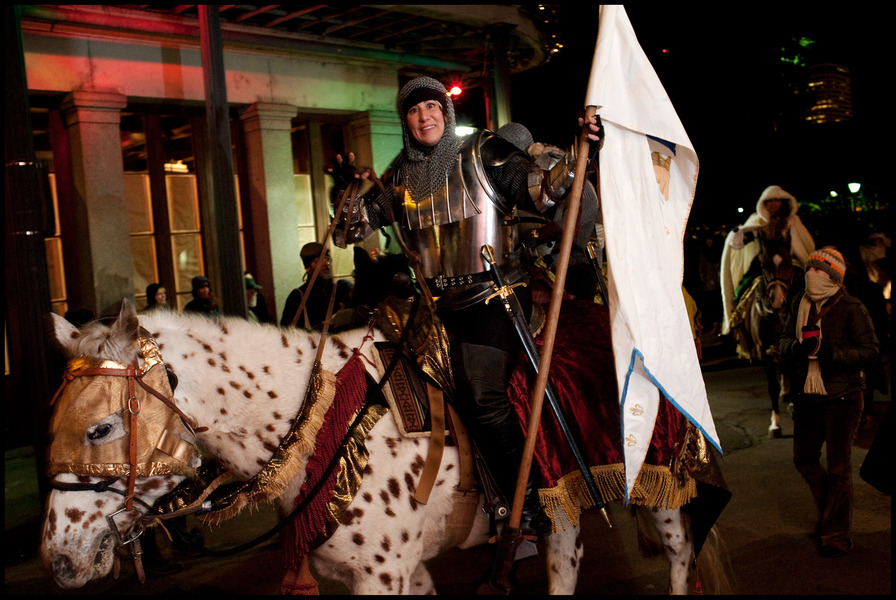 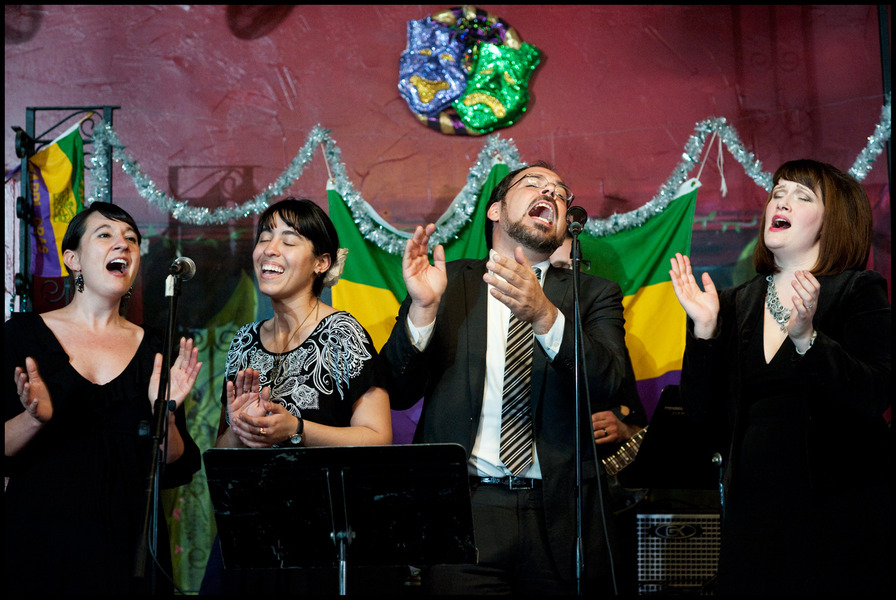 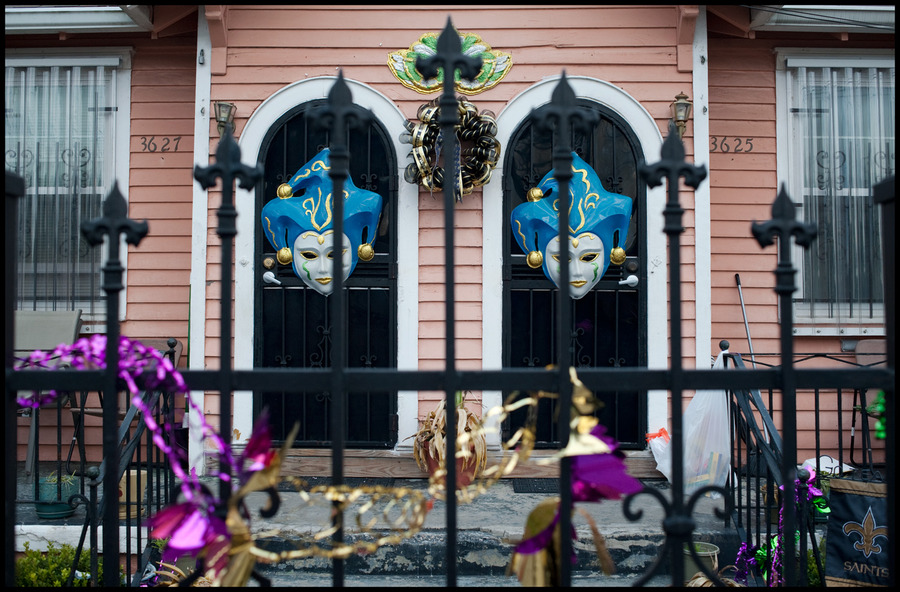 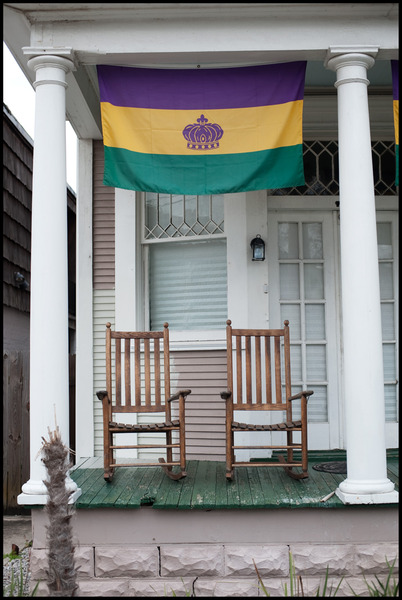 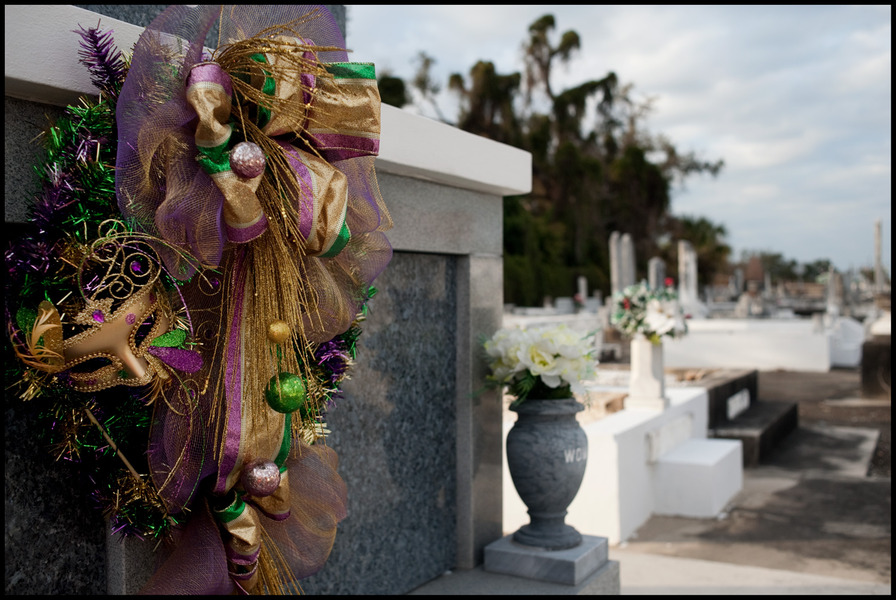 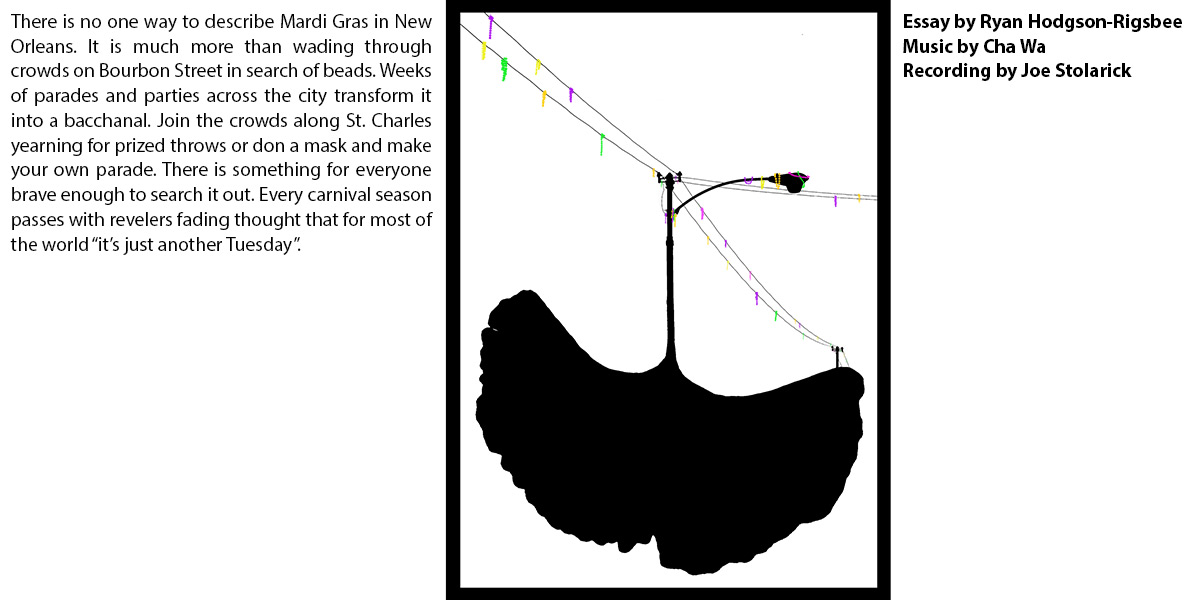 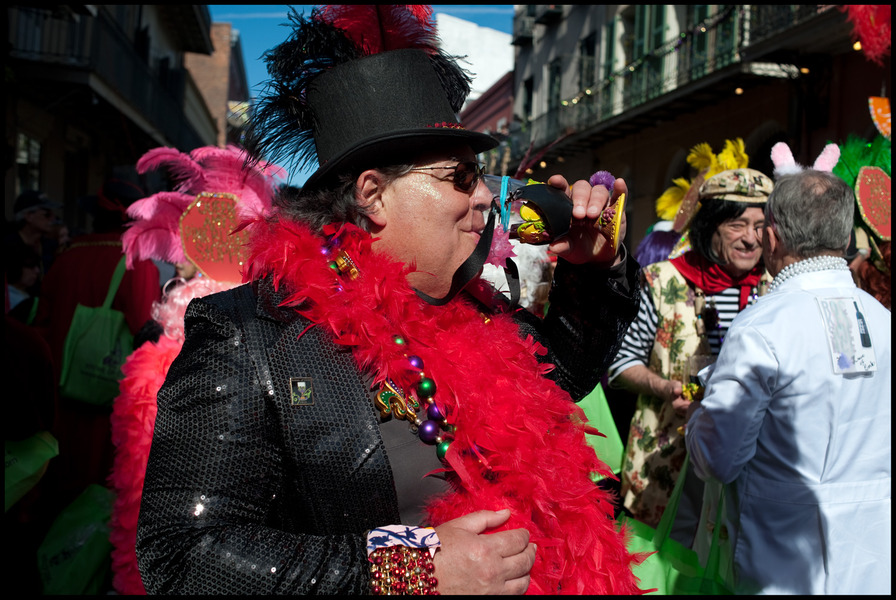 Chuck Boudreaux of Lafayette at the Krewe of Cork parade in the French Quarter. Cork was founded as a French Quarter walking parade in 2000 in celebration of wine, food, and fun.

Ricky Maloney (right) of NOLA during the Krewe of Cork parade in the French Quarter.

Linda Smith (right) of NOLA during the Krewe of Cork parade in the French Quarter.

Members of 'tit Rex micro-krewe make mini throws, in preparation for their parade.

'Tit Rex was founded in 2009 as the world's first Mardi Gras micro-krewe. Inspired by the push for larger and larger Mardi Gras floats, 'tit Rex founders decided to move in the opposite direction by shrinking all the floats and throws to miniature proportions.

Jeremy Yuslum puts the final touches on his float for the 'tit Rex parade.

"We the Peeple" float

Christie Walton and Alex Rawls get ready to line up their floats for the start of the parade.

Claudia Lynch and Karen Crain with their "Cheewee The People" float.

Veronica Russell with her "We the Peephole" float

"Me the People" float by Janine Hayes

Cha Wa at the Rusty Nail.

Floats getting worked on near Mardi Gras World

Krewe of Cleopatra is an all female krewe that was started over 40 years ago. Cleopatra, like most of the New Orleans parades, starts in Uptown and moves down Saint Charles to Canal Street.

Mystic Krewe of Druids was started in 1998, and is made up of 200 members who are mostly from other Carnival organizations. Their tradition is that riders are all unknown to the public.

Katrina Brees works on her bikes in preparation for the Krewe of Muses parade.

The all female Krewe of Muses hit the streets in 2001, and has grown to over 1000 members. Riders decorate individual shoes, much like Zulu’s Coconut, to hand out to a lucky few along the uptown route.

Muses heading up Tchoupitoulas for the start of the parade.

Krewe of the Rolling Elvi began in 2003 after its founders were inspired by a group of Shriners in a passing Mardi Gras parade.

Susan White and Nanette Schoen hold up their home made Muses' boots.

The Glambeaux, an all-female flambeaux group, marching in their first parade as part of Muses.

Krewe of Nyx rolling in their 3rd year.

610 Stompers emerged in the summer of 2009 as a dancing troupe. Their motto is “ordinary men with extraordinary moves."

Bourbon Street during the final weekend of Mardi Gras.

Persephone's Dragonflies meander through the Quarter.

Marked spaces the day before Krewe of Endymion.

Founded in 1966, Krewe of Endymion is one of the largest Mardi Gras parade with over 2800 members and record breaking large floats. Endymion is the only parade to roll through Mid City.

Parading on the Sunday before Fat Tuesday, Krewe of Thoth started in 1947.

Big Shot Krewe gets ready for the morning Zulu parade.

Pekitha West gets her face painted during a pre-Zulu breakfast at the Little Gem.

Member of the Big Shot Krewe at the Little Gem Saloon.

Fat Tuesday -7:00 a.m. - Northside Skull and Bones on the prowl in Treme

Fat Tuesday - 2:00 p.m. - Golden Eagles Big Chief Monk Boudreaux steps out of his house for the first time in his 2014 Indian suit.

The Golden Eagles Spy Boy J'Wan Boudreaux sings as they walk through the Uptown streets on Fat Tuesday, Mardi Gras 2014. This year's Fat Tuesday hit a low of 39 degrees (F), which was close to breaking the record set in Feb. 14, 1899 of 38 degrees.